skip to main | skip to sidebar


The much anticipated only visit to Vancouver by the Leafs this season, goes down tonight. Both teams have struggled out of the gate, with the Leafs having the advantage in the struggling department. A number of circumstances have come together to meet at this game to likely make it worth watching, and they are: 1) The Leafs trying to get their first win of the season to break a 7 game losing streak 2) the Leafs haven't played for 7 days, so the withdrawls are getting bad 3) the love triangle of Brian Burke-Ron Wilson-Mike Gillis which culminated in tampering allegations and a Vagina full of sand for Gillis 4) when Toronto comes to town Vancouver gets excited because it means people outside of BC will actually give a shit about what happens 5) we can see how fat the Anthropomorphic gelatinous blob know as kyle Wellwood has become.

This game is especially important for the Leafs, who - as mentioned before - are win less this season and are hoping the week long break will allow them to "reset" and "start fresh". To facilitate the pressing of the reset button, Ron Wilson has tried to make the team forget their trials and tribulations by having fun. This week the Leafs had a Halloween party and a 3 on 3 tournament in hopes of forging brotherly bonds. This game (more so then the last 5) signifies a potential turning point for the Leafs, as it marks the beginning of a 5 game road trip. Should they come out tonight and play a strong game while getting a win, the stage could be set for a successful road trip which could catapult them back into playoff contention. However, if they pull a Wellwood and literally choke, it could be a lonnng road trip.

Vancouver started out their season rather rocky by losing the first three games. When Montreal came to town, it was the battle of the most pathetic fans in hockey, which Vancouver won 7-1, thus getting the season rolling and then winning 3 of the next 5. A question mark so far this season for the laughably named Canucks has been Roberto Luongo. After signing a 12 year extension in the off season, Luongo started off the season poorly until he was pelted with granola and "Save the baby Seals" keychains by Canuck fans. Since then Luongo has returned too his usual form and hopes to continue to remain strong tonight.

Former Leaf Kyle Wellwood has also had a suspect start to his season. With 1 assist zero goals in 9 games, it's clear he's still as useless today as he was in Toronto. Wellwood was actually in Toronto recently when he thought he smelled Bacon. Alas, it was just Jason Blake being pan fried.


Tune in after the game, where I will post my notes that I will take as the Leafs play.

Posted by nikolaou at Saturday, October 24, 2009 No comments:

I have not had time to write any posts this week, but will write one tonight, and then tomorrow (friday) i will write a preview for the Leafs-Canucks game and then i will do a live summary as the game is going on.

for now, here are some Leaf jokes that were in the Toronto Star today, as well as some others I came across.

-Why doesn't Hamilton have an NHL team? Because then Toronto would want one

-What do the Toronto Maple Leafs, Toronto Argonauts and the Toronto Blue Jays all have in common besides being based in Toronto ?
None of them can play hockey.

-The Leafs have decided to play all of their games underwater in future. Apparently there are 20,000 leagues under the sea and they hope they can find one they can win in.

-Two guys are camping out in the Muskokas, sitting around a fire at night and relaxing. Suddenly one of them sits bolt upright and shouts "DAMMIT! The Leafs lost!" His friend, impressed with his friends psychic ability asked "How do you know?" His friend replied, "It's after 10:00pm."

- Whats the difference between a Triangle and the Toronto Maple Leafs? a Triangle has 3 points.

-Why did Vesa Toskala interrupt two people having sex? He wanted to know what it felt like to stop someone from scoring.

-What does the Leafs and the Titanic have in common? They both look great until they hit the ice!

-What did the Leaf fan do after the Leafs won the Stanley Cup? He turned off his PlayStation.

-What do the Leafs and Tampons have in common? they are only good for one period.

-What does Mike Komisarek and Timmins, Ontario have in common? They are both Minus 25 come Christmas.

- Why did Brian Burke insulate his house? Because he didnt like the Draft


-Two friends die in a car accident during a terrible snow storm. They arrive in Hell and the Devil begins their punishment by turning up the heat very high. But the two friends are not in any pain, in fact they appear happy. The Devil asks why are they happy and they respond that they are from Canada and it's nice to be around warm weather. The Devil turns the heat even higher, still nothing. He then decides to lower the temperature in Hell as much as possible, thinking that the two friends could not bear such coldness. Instead he finds them happier than ever and jumping for joy. "It's freezing here!", says the Devil "Why are you two so happy??" One of the friends replies, "Hell just froze over! The Leafs won the Stanley Cup!"


-Hockey Night in Canada is concidering dropping the Leafs from its national broadcast and showing the Leafs in Ontario only. actually thats not a joke, it was reported today in the Toronto Sun.

also, I wanted to point out that I am an avid Leafs fan, which is why I write a Leaf Blog but I wanted to brighten up the mood a bit concidering the start to the season. However we have to remember that the plight of the Leafs is not amusing after what's happened with Vesa Toskala this morning. I appreciate we are all down on the team but when a player becomes suicidal from their performance (and the media's response to it) then we should all rally together behind him. As most of you know, Toskala tried to commit suicide last night, by standing on the train tracks just south of Dupont. Thankfully, the train went through his legs.


Thats all folks
Posted by nikolaou at Thursday, October 22, 2009 No comments:

I would like to apologize for the lack of updates this week. With midterms around the corner and personal commitments plus the small amount of leaf related news has resulted in not having the time nor the inclination to write anything


starting tomorrow or the day after, i will try and get back to a 1post/day schedule, and we can get back to complaining about the leafs.

if there is anyone out their who would like to write for TrucuLeafs, either on a part time or full time basis, please let me know.

Tonight, the Leafs hope to end a 6 game losing streak, and leave those losers the New York Islanders in the dust, as the only team who has yet to win a game this season. Since the Panic Button had to be sent in for repairs due to constant pressing, Brian Burke and Ron Wilson decided to press the Reset Button instead. Coach Wilson felt the team was no longer having fun and was afraid to make mistakes, so he organized a "Fun practice" of Dodgeball and Finger painting. Then at 6:00 pm, Their mommies came and picked them up. Jason Blake was excited because he was going to visit his cousin.

It is likely Matt Stajan and Nik Hagman will be back in the lineup after being healthy scratches in a 4-1 loss to Colorado. With Vesa Toskala and Jonas Gustavsson still injured, Andy McDonald and James Reimer will be the Starter and Backup respectively. Jonas Gustavvson is expected to be back the following game, which is next Saturday vs Vancouver.

While on paper, this years defense far surpasses last years, expectations have been dashed by poor defensive zone coverage and mental errors. A solid effort tonight could be a big step toward rejuvenating the fans and getting the defensive play to the level where it should be. Francois Beauchemin, Mike Komisarek and Luke Schenn would benefit the most from a strong game at the ACC.

A win tonight would allow the Leafs to set out on a positive note on their upcoming 5 game road trip. It would also allow them to not be justifiably booed out of their own building for the third home game in a row. The upcoming road trip could end up being very important if the Leafs are still in the playoff hunt when game #82 rolls around. with 11 of a possible 12 points already gone this year, the upcoming 10 points - 4 of which are against division rivals - could make or break the season. The final game of the road trip is clearly a practical joke from NHL head office, as it takes place Halloween night Vs Leprechauns.

The Rangers are basically then Anti-Leafs right now as they are on a 6 game winning streak and first in the league with 12 points and a 6-1-0 record. With Marian Gaborik and Vinny Prospal red hot with 10 points each, and rookie Defensemen Michael Del Zotto with 7 Pts, Toronto will undoubtedly be tested to its limits. And if a 6 game losing streak wasnt enough adversity for the Maple Leafs they will have their hands full trying not to score in their own net.

If the Leafs lose tonight the question will be "how many loses will it take before Burke starts mortgaging the future to prevent a top 5 draft pick?"

Hopefully the Leafs will win and get the ball rolling so we don't have to ask that question. 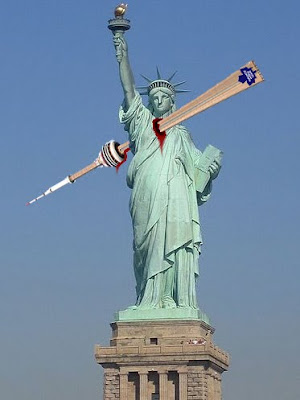 Can we jump yet?

Will the Leafs make the Playoffs?